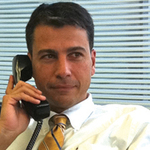 HANI KHOURY is a partner and founding member of the law firm of Awad & Khoury, LLP. He is a graduate of Colgate University and New York Law School. He was admitted to the bars of New Jersey and New York in 1992 and 1993 respectively. Mr. Khoury is always ready to tackle heavily involved cases in the fields of Immigration and Real Estate. He has built his reputation by providing his clients the proper guidance and resources necessary for favorable outcomes.

Mr. Khoury has spoken numerous times at educational forums regarding Arab Americans in post-September 11th America. He has been interviewed by the New York Times, Washington Post, Boston Globe, Bergen Record, Herald News, and the Associated Press regarding post-September 11th detainees and has appeared as a guest on New Jersey's Network. Mr. Khoury was a part-time Lecturer at the Center for Middle East Studies at Rutgers University in New Brunswick, New Jersey.

In addition, Mr. Khoury has held executive positions with numerous civic organizations, including the Arab American Institute and the American-Arab Anti-Discrimination Committee as well as his past appointment to the Bergen Community College Board of Trustees. He has also served on the Arab and Muslim Advisory Committee, which was a committee formed by the Governor of New Jersey for the purpose of advising the New Jersey Attorney General and the Department of Law and Public Safety on how to handle matters of discrimination against members of the Arab and Muslim community in New Jersey.

Mr. Khoury has recently been reappointed to the New Jersey Supreme Court's Committee on the Unauthorized Practice of Law. The Committee performs the valuable function of providing guidance for the bar and protection for the people of the State of New Jersey against those engaging in the unauthorized practice of law. Mr. Khoury's decision to be part of the UPL Committee is a reflection of his tenacity and dedication to the legal field.

In addition to his other civic volunteer endeavors, Mr. Khoury is a volunteer attorney for The Center for Hope and Safety (formerly Shelter Our Sisters) in Bergen County, New Jersey, which is a non-profit organization that provides assistance to women, men and children who are victims of domestic violence. He has been a volunteer for the organization since 1992, and continues to work with the organization.